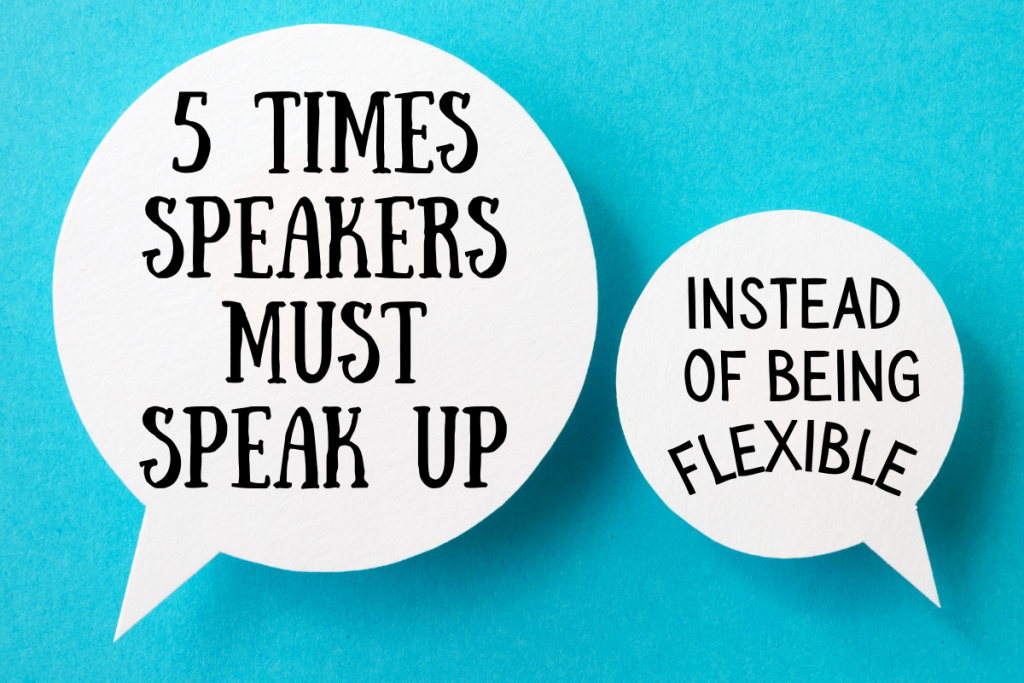 If you’ve read A Dietitian’s Guide to Professional Speaking, you know I’m a firm believer in going with the flow and making an impression as a flexible speaker. After giving a fantastic performance, being easy to work with is the next most important way to polish your reputation and be invited back.

The hotel elevator broke? You’ll hoof it up the stairs. The previous session ran long? You’ll tailor your remarks to whatever time remains. Flexibility without complaint endears you to your host, your audience, and especially the person who messed up.

There are a few notable exceptions where you have to either speak up and ask for what you need or refuse a request from your host, even if you’re afraid of seeming demanding or uncooperative. In these specific few cases it’s not just your option, it’s essential that you stick up for yourself, even at the risk of making waves.

#1: The Situation Will Make You Sick

Your hotel room reeks of smoke and it’s making you nauseous; your salad has something on it that gives you stomach cramps – when something is going to make you ill, it should be super easy to ask for what you need. But the desire to be accommodating and not diva-licious can interfere with even common sense.

If you’re hesitant to speak up, channel your inner caregiver and imagine you’re asking for a friend. With utmost politeness, meet the task at hand. Ask for a different room, or could the kitchen please remake the salad. If at first you don’t succeed, ask to speak to someone else.

Once I arrived at a ballroom to check out the scenario about an hour before an all-day event. I walked to the dais where I would be presenting and realized the placement of the screen meant intense projector light was shining right into my eyes. Light and glare are my migraine triggers, and this was a definite recipe for pain.

I mentioned this to my host who suggested this was a molehill not a mountain. Not wanting to go over her head, I was immediately tempted to just let it go. But I knew that even if I got through the day, there would be hell to pay when the migraine hit. I found the hotel AV staff who figured out a set-up that worked much better.

#2: You’re Going to be Uncomfortable or Distracted

Your success as a presenter relies on giving your full attention to the task at hand, not halfway being distracted by the music in the background or worrying that someone can see up your dress.

For a panel in a convention center, I walked into the ballroom and noticed the table on stage wasn’t draped. If I sat there in my dress, the audience would have an awkward view. Although my co-speakers encouraged me to just go with it, I knew I’d stress about keeping my legs and knees constantly crossed. I asked to speak with the person in charge who obtained a table covering from conference center staff.

I’m easily distracted by noise, so even soft piped-in background music will distract from what I’m trying to say. I’ve noticed this in smaller hotels where they’re more used to social functions than speaking events, and in restaurants with private rooms. Usually a waiter can turn the music off, but on occasions they tell me it can’t be done, I just ask for a manager. Sometimes “It can’t be done” is code for “I don’t know how” or “I don’t have the authority.”

I’m sure there are situations that can’t be changed. But you owe it to yourself to make the effort and at least a little way go up the chain of command.

It’s not an emergency, but it’s a worry. You notice an emergency exit is blocked, someone potentially suspicious is lurking around, there’s a noxious smell of unclear origin. It’s bothering you but you’re not sure it’s important.

Go ahead and bring it up to your host or staff and let them investigate. Explain you don’t want to ruffle feathers, but you’ll feel better if someone could look into it. You don’t even need them to report back, you just wanted to tell someone. This isn’t demanding; it’s detail-oriented, and sets the stage for a successful talk.

Any situation that feels inappropriate or triggers your internal warning system is a situation you should leave. The reason you give is less important than just getting out. You can make an excuse, offer an alternative, or simply say, “I’ve got to go.” If someone else’s feelings are hurt, that’s about them.

Interpersonal boundary breaches can be slippery and hard to spot until you’re right in the middle of them. You often don’t detect them up until the very moment they cross the line. It doesn’t matter how much you’ve agreed to already. Once you realize you want out, it’s time to make your move.

Going out with colleagues the night before your talk can be a welcome distraction. If you feel pressured to stay when you’re ready to go, it can be tempting to go along with the crowd. Don’t. Either take a stand or just slip out, but don’t risk being grouchy or tired because you drank too much or stayed out all night.

Meeting with the conference organizer to go over the schedule is routine. When you get to their hotel room and they’re waiting in their bathrobe, Houston, we have a problem. As you walk away, say you must have mistaken the meeting time and you’ll wait in the lobby until they get dressed. Alternately just walk away.

Your number one job is take care of yourself. Anyone who puts that at risk is someone you don’t need to worry about offending, but it doesn’t always feel that way. Your professional side wants everyone to like you. Not just in the sense of wanting to fit in; also because good relationships with peers and people in charge lead to recommendations, referrals, and ultimately more work.

Experienced perpetrators exploit that fact and are ready to take advantage of it, and you. Peer pressure is often easier to deflect than the person who makes you question your own judgment, professionalism or morals. They may try to rewrite history, or tell you you’re in the wrong. I hope this never happens to you. But if it does, please, PLEASE speak about it with someone you trust, someone who can assure you that it was not your fault.

Anything that deviates from your written agreement requires a discussion rather than a unilateral decision.

Let’s say you’re scheduled to speak at 1pm and you find out you’ve been moved to 4. You potentially could make your flight, but it’s going to be tight, especially with traffic. You’re tempted to roll with the punches to keep everyone happy, but internally you’re stressing out.

Consider your options to the extent you can. If you’re willing to stay later than planned, check online or call the airline to see if your flight can be changed, and if there’s room on a later flight (if there even is a later flight). If it means spending an extra night, ask the hotel if there’s a room available. Consider talking through your thoughts with a friend or colleague on-site or at home to determine if a) the change is feasible and you’re just annoyed, or b) if it’s actually a no-go and you need to push back.

Once you’ve determined which options you can live with, find your host or the person in charge and ask to discuss the situation privately. Let them know what you’ve learned about alternate travel plans and what they will cost the organization, or explain that you simply can’t take the chance of not making your flight. Stress that you’ll be happy to present at the original time if that’s still an option, and let them know what time you would need their decision.

Hopefully in most situations, it will be clear what route you want to take, and the majority of the time small changes will work out. But you are ultimately the captain of your ship and need to be consulted about things that affect your performance.

There are lots of things you can tolerate as a speaker, and several things you shouldn’t have to. You may be tempted to grin and bear an unsatisfactory situation or “Make it work!” as Tim Gunn would say. But that endangers the whole reason you came. Don’t take a chance on muddling through your talk when something is wrong that can be fixed. If it’s a choice between seeming demanding and doing a bad job, you simply can’t take the risk.

Have you had a speaking situation where you mustered your courage to rock the boat? A time you look back on and wish you had spoken up more strongly? How did it turn out? I’d love to read your experiences if you’ll comment below. And if you have a specific situation you’d like to talk over, send me a message at [email protected] and let’s set up a time to talk.

"Not only is the material itself great, but the whole book is infused with a warm, non-judgemental and no-nonsense energy which I absolutely loved and made it so wonderful to read."

"I'm quite enjoying the book… I was howling in outrage on your behalf when reading about your payment snafus!"

"This book is packed with so much useful information that will save RDNs countless time and headaches. And I loved reading it! I almost missed my stop on the train."

"I totally thought of [A Dietitian's Guide to Professional Speaking] when I was in the middle of negotiating a speaking arrangement. I basically said in my head I really want to do this but it's not my ideal audience so what's the number that makes it worth it for me to spend 3 hours of my time there.... and I got it!! yay!!! So thank you so much, you and your book just made a huge difference in my business :) YOU ARE AMAZING :)"

"Jessica not only has a talent to figure out the niches dieticians need info about, her writing is out of control fantastic. The conversational tone of this book is filled with compassion, humor, and the kind of support dietitians are so hungry for."